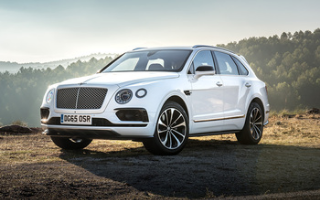 Bentley Bentayga
Bentley has launched what they claim to be the 'fastest, most luxurious SUV in the world', the Bentayga.

CO2 emissions for this vehicle come in at 296g/km with an official fuel consumption figure of 21.6MPG placing the Bentayga in the current top-spot for BiK percentages of 37%.

The Bentayga is claimed to have a top-speed of 187mph, made possible by the almighty power of the twin-turbo 6.0 litre W12 engine that outputs a massive 600hp and 900Nm of torque! This engine is matched to an 8-speed automatic gearbox which drives the all-wheel-drive system. The transmission and four-wheel-drive system has been strengthened to handle the demands and high torque levels of off-road driving.

It surely comes as no surprise that the CO2 emissions for this vehicle come in at 296g/km with an official fuel consumption figure of 21.6MPG placing the Bentayga in the current top-spot for BiK percentages of 37%.

The Bentayga comes with multi-mode air suspension which allows the driver to have four different modes to choose from: High 2, High 1, Normal and Low and drivers can also lower the rear suspension via a switch in the boot, to ease loading and trailer hitching.

This new model has four- or five-seat configurations to choose from! Whether selected in four- or five configuration, all of the leather seats in the Bentayga are available with contrast stitching and a quilted diamond design applied to the ‘shoulders’ and bolsters, echoing the design of a finely tailored British hunting jacket.

Six lifestyle-orientated specification packages will be available from launch, including two styling packs. In addition to these options, the Bentayga is available with the widest range of lifestyle accessories ever offered by the Bentley brand. At launch, the Bentayga is available with an exquisite integrated Mulliner Hamper Set, complete with refrigerator, bespoke fine Linley china cutlery, crockery and crystal glass, and storage area for dry goods. For comfort in the great outdoors, sections of the hamper can be removed and used as seats. As with most Bentleys, paint, leather, veneer and lifestyle options are unlimited and tailored to the individual.

The Bentayga also comes with a host of safety features such as Adaptive Cruise Control (ACC) including Stop & Go, Predictive ACC and Traffic Assist which enables the driver to maintain a set distance to the vehicle in front. Predictive ACC uses the navigation data, sensors and cameras to predict upcoming corners, city boundaries and speed-limit changes and can then modify the vehicle speed accordingly, improving both comfort and fuel economy.

Not the conventional company car but if it's what you're after...it's here! You can now find the Bentayga model on Comcar's comprehensive tools to compare and configure using the link at the top of this article. To those of you that this model sounds like a realistic prospect, you'll also probably be happy to know that the Bentayga will be available as diesel and hybrid variants in the future.